Through the years, Curtis’ work has earned him articles and mentions in various publications. It makes for some interesting reading! Just for fun, here’s what the Bluegrass Today collection looks like:

New York in the 1960’s was a fabulous place to be for a young guitar nut. There were great players like Dave VanRonk appearing at venues even an under-age guy could go to. Then, there were folks like Doc Watson coming to town! I remember hearing Doc and Reverend Gary Davis jamming backstage at a hall…that was really something! …. Years later I would find myself working with some of my heroes– opening up for folks like Brownie McGee and Sonny Terry or Merle Haggard, or performing with Mike Seeger….
More →

November 30, 1960 Recording session – Bill Monroe and the Blue Grass Boys recorded Sold Down the River, Linda Lou, You Live in a World All Your Own and Little Joe. All four songs were Monroe solos, despite the fact that Linda Lou was written by then guitar player Carl Butler, and included on the LP Mr Blue Grass (Decca DL7-4080) released on May 29, 1961.  The musicians at the session in addition to Monroe and Butler were Curtis McPeake [banjo], Bessie Lee Mauldin [bass] and Dale Potter [fiddle].  – Richard F. Thompson, “Bluegrass Today“ 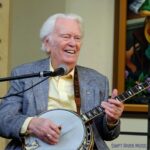