Born in 1943 and grew up in the Bronx. We were all music-crazy in the ’60s, from Django Reinhart to Doc Watson and Charlie Byrd to Blind Lemon Jefferson.

I first heard Lightnin’ Hopkins and John Lee Hooker on Nat Hentoff’s radio show-an experience that changed my life. Artie Traum and Larry Sandberg showed me the rudiments of finger picking. Brownie McGee and Reverend Gary Davis were teaching guitar in Harlem but I was too shy to go, so I listened to lots of L.P.’s of the old guys on my parents Grundig Majestic Hi-Fi and tried to teach myself their styles –which I am still doing 50 years later! Still trying to figure out that Snooks Eaglin run–how he got that tone–oh well!

Had a blues band out of Cambridge, Mass. in the seventies-played the clubs and opened for guys like Hound Dog Taylor at Joe’s Place in Inman Square. Tried playing with a flat-pick, but dropped it enough times in the middle of a set to know it wasn’t for me. I’m finger-style all the way…thumb keeps the rhythm… first two fingers and sometimes third play the melody… thumb first finger up and down for fast runs-used to use metal fingerpicks… now I like the plastic ones.

I have had a pretty crazy life in the midst of which I sometimes miss playing for an audience-so I play the clubs now and then…lately in Marin County, California.

Recorded “Dreamin’ the Blues” which my brother Andy produced in 2000. My guitar was an old Sigma that I paid $100.00 for. Now I have a few better guitars and a bunch of new tunes so maybe we’ll do another CD soon. Stay tuned! 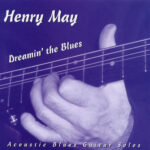