Recorded Event of the Year!

CDs:   Everett Lilly and Everybody & Their Brother

The Lilly Brothers (Everett and Bea) were among the greatest artists in the brother duet and early bluegrass styles of music. Born in West Virginia and based in Boston during the 1950’s and 1960’s, they helped turn a whole generation of listeners onto traditional country music, through both their live performances and their recordings. They – along with Don Stover, who performed with them – were inducted into the International Bluegrass Music Association’s Hall of Honor in 2002.

I think when we all get to Heaven we’re gonna find out that Everett Lilly is God’s favorite mandolin player– and mine too!  — Marty Stuart

Singer and mandolinist Everett Lilly was one of the great pioneers in bluegrass music and one of its most influential musicians. Everett and his brother, Bea (Michel Burt Lilly) began their career as a brother duet in the late 1930’s by singing in churches and playing shows near their home in Clear Creek, West Virginia. Soon The Lilly Brothers became regulars on radio, eventually playing on such shows as the WWVA Wheeling Jamboree in Wheeling, West Virginia, further increasing their popularity.

In 1950, Everett joined Flatt & Scruggs and the Foggy Mountain Boys playing mandolin and singing tenor. He stayed with them until 1952, and recorded many classic songs with them, including Get in Line Brother, one of the songs on Everett’s 2008 IBMA award-winning project on Swift River Music, Everett Lilly & Everybody and Their Brother.

Everett rejoined Bea in 1952 and they relocated to Boston. There, along with banjoist Don Stover— and, for a while, fiddler Tex Logan— they began an amazing sixteen-year gig as the house band at the Hillbilly Ranch and performed daily radio shows on WCOP. They also recorded a number of excellent and highly influential LPs, introducing a whole new regional audience and a new generation to bluegrass music.

In 1970, Everett chose to return to West Virginia, but the Lilly Brothers continued to perform at bluegrass festivals and tour overseas. In 2002, The Lilly Brothers & Don Stover were inducted into the International Bluegrass Music Association’s Hall of Honor, the highest tribute that the bluegrass community bestows.

Everett Lilly has passed on his love of music to his sons, some of whom performed with him for many years in The Lilly Mountaineers. —Swift River Music 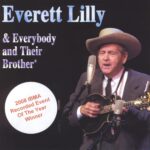