In a ceremony broadcast live on Kyle Cantrell‘s Bluegrass Junction show on Sirius XM, the International Bluegrass Music Association (IBMA) named banjo legend Curtis McPeake a 2018 Distinguished Achievement Award recipient. This is the organization’s highest award outside of induction into the Bluegrass Hall of Fame. (View IBMA’s full press release for this event)

“In recognition of his lifetime of contributions to bluegrass as one of Bill Monroe’s Blue Grass Boys, a stand-in for Earl Scruggs at Flatt & Scruggs shows, as a member of the Opry’s staff band, and as a Nashville session player, among his many accomplishments.” 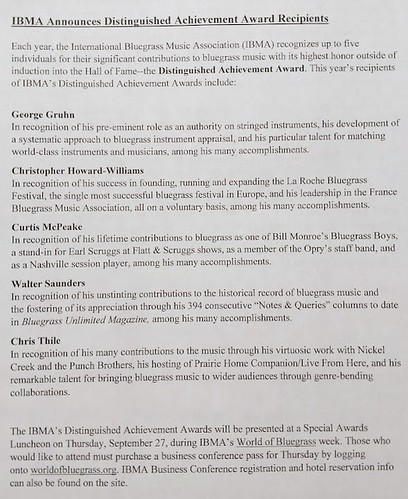 Mouse-over to scroll through images here, or view full-sized photos on Flickr

McPeake & May on “Grass Roots” – an official Spotify Playlist