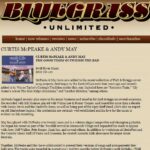 McPeake & May have now added to the recent collection of Flatt & Scruggs cover-song projects, first begun by the Earls Of Leicester four years ago and recently added to by Wayne Taylor’s Carnegie Tradition earlier this year. Included here are “Reuben’s Train,” “My Home’s Across The Blue Ridge Mountains,” and “Leather Britches,” among others.

McPeake logged seventy-plus years in the music business and stood in for Earl Scruggs on several occasions. He recorded with Bill Monroe, played with Wilma Lee & Stoney Cooper, and toured for more than a decade with Danny Davis and the Nashville Brass, as well as being part of the Opry Staff Band. (He’s also an expert on old Mastertone banjos.) His credentials are certainly well-established and his love for the music is evident on this recording.

May has played with McPeake over twenty years and is a veteran singer/songwriter and champion guitarist. He began his career as part of the ’60s folk revival in Greenwich Village and expanded his reach to appear with Jerry Jeff Walker, Pete Seeger, Janis Ian, and several others. In addition to workshops at MerleFest and the Country Music Hall Of Fame And Museum, he created Acoustic Kids showcases for major music festivals.

Together, McPeake and May have collaborated to present their versions of songs and arrangements they both love. The tracks were recorded in August 2017, just two months before McPeake’s 90th birthday. (Well done fellows!) “Grandpa’s Mule” is the only selection that isn’t an old chestnut. Written by Andy’s wife, Lauren, the song is about her Alabama grandfather’s infamous mule, Betsy (not to be confused with the nickname for Curtis’s 1939 RB-75 Mastertone). You’ll hear a little of “Flop-Eared Mule” in this one, which should probably bring a smile to your face. Aubrey Haynie adds fiddle work and Tim Dishman is on bass and harmony vocals. As the CD jacket indicates: “Heckuva good time!”  – BW, Bluegrass Unlimited

Curtis McPeake, Andy May, & Gene Watson on Deck for the Justin Reed Show