By the time we started The Andy May – Texas Tabby Crabb Band in 1977, Tabby and I both had years of experience in different commercial music scenes. We knew enough to realize the hard work and luck that it would take to make a living wage from a band. And it did.

We worked together on getting bookings- clubs for starters, then colleges, schools, special events, and finally concerts. We worked close by at first and then stretched out into neighboring states. Very soon the workload of gigs got to be more than Joe Giandalone, our bass player could handle, since he had a piano tuning business during the daytime hours. We added “Wild Bill” Holloway on bass (also a strong singer), and sometime later,  Andrew “Chopper” Chodorow on drums.

Tabby and I started out as friends who liked a lot of the same music and that was the attitude and blend of music that we presented to our audience. We sang well together, and folks really liked it. Tabby could wail on the steel guitar and five string banjo, flat top guitar, telecaster and fiddle. We also featured a lot of my electric mandolin playing, telecaster stylings, and flat top acoustic guitar work. We mixed songs that were popular at the time with timeless country classics, blues, Old-Timey Southern fiddle tunes, bluegrass standards and New England traditional dance tunes. We both were songwriters too, and that added something special to our performances. We were a band that you could listen to, party to, or dance to, and the local and regional press enjoyed writing about us, so we stayed in the public eye. A highlight of those years was playing at a private event held for Kitty Wells, “The Queen of Country Music” and her husband, Johnnie Wright.

After a wild and rewarding ride, AMTTCB disbanded in 1978. I wanted to do more writing and solo work and to do some recording.  The last performance of Andy May and Texas Tabby Crabb was on September 3, 1978, when we opened a large outdoor concert for Merle Haggard and the Strangers in Escoheag, Rhode Island. It was a great way to end things!

Tabby and I remained friends and played music together occasionally over the years. In 1996, we ended up being neighbors again, living less than 10 miles apart in rural Wilson County, Tennessee. Several years ago, I wrote a song about the AMTTCB times called Haggard and the Queen. The video below is from an early performance of the song at MerleFest. This one’s for you, Tabby!

AMTTCB show poster from back in the day, hand-lettered by Andy. 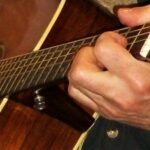 Gallery image with caption: “Room for Roots” in Ireland