Everett Allen Lilly, Jim Rooney, and Richard Brown were on the panel for the Everett Lilly Story-telling Session: “Remembering the Lilly Brothers.” Everett’s last CD, the Swift River Music release, “Everett Lilly and Everybody and Their Brother” won the 2008 International Bluegrass Music Association award for “Recorded Event of the Year.” Andy played mandolin and did post-production work on the project.

Best Walnut Valley Festival ever! Fabulous time. Fabulous memories. Thank You, Winfield!!
This album is from a Facebook feed.

2012 Article on Acoustic Kids in the “Winfield Courier”

Andy May is a wonderful award-winning musician, singer, songwriter, producer and an overall entertaining performer. He has been a repeat headliner at the Walnut Valley Festival for many years. But this year, Andy is celebrating a different accomplishment: The 41st Walnut Valley Festival is also the 22nd consecutive festival where May has coordinated and hosted the highly-acclaimed Acoustic Kids Workshop. 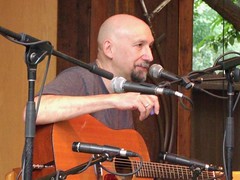 Many thanks to all: Together, we were able to contribute $1100.35 to the relief efforts!

Earlier in the day, Andy was on the air at KRFC, hosted by Cynthia Bigelow, to promote the event. 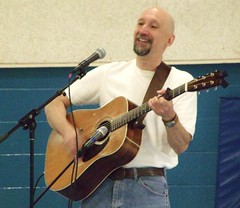