The long-awaited reissue of Mandomonium Mandolin Orchestra’s CD, Mandomonium, is a reality, and we’re glad to say, it will has a home on Swift River Music! Sporting the wonderful music art of Karen Cannon (who also did the covers for Andy May’s Cafe’Americana CD and Dance of Life reissue, newly remastered by our go-to engineer, Nathan Smith at Mainframe Recording Studio in Nashville, TN, and bursting with all the fun and spirit of the original release, we are delighted to add this title to our catalog. 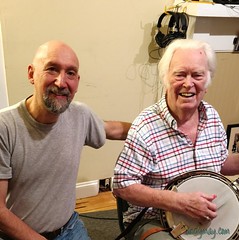 After a fast and furious week of recording, mixing and mastering, the new Curtis McPeake CD, as yet unnamed, is ready for the next step. Andy produced the old-time bluegrass project, featuring Aubrey Haynie on fiddle, Tim Dishman on bass, Andy May on lead vocals and guitar, and – of course – Curtis on banjo, at Mainframe Recording Studio in Nashville with Nathan Smith as engineer. More details to follow, but here are some pictures for you, now: 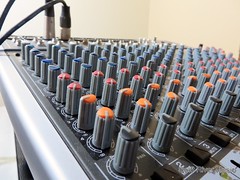 Bring together thirteen musicians sporting backgrounds from bluegrass, classical, and jazz. Add the love for the rich mandolin orchestra sound from the 1920’s, and you have Mandomonium! Founded and directed by Brent Hawley, this eclectic ensemble tackles songs that challenge the musicians and keep the listeners on the edge of their seats. Credits Produced by Brent Hawley Mandomonium Mandolin Orchestra First Mandolin: Grant Gordy, Dan…

END_OF_DOCUMENT_TOKEN_TO_BE_REPLACED

Gallery image with caption: Jean Ritchie: “MaySongs” by Andy May

Gallery image with caption: Ranger Doug: MaySongs by Andy May