Photos: Andy May at the 2007 Walnut Valley Festival 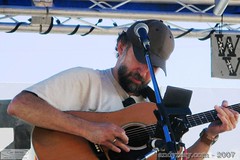 Andy’s sets at the Walnut Valley Festival were a special treat this year. In addition to Jeremy’s wonderful support on bass, he was joined by Jeff Taylor on accordion, Tim Thompson on guitar, and Bruce Graybill on Mandolin.

…Top notch instrumentation …by Andy as well as a cast including some of Nashville’s first call musicians…. My favorite of all the tracks had to be the title cut, “Endless Possibilities.” …The song is as smooth as a gentle summer breeze.   —Rex Flottman, Walnut Valley Festival (Winfield) program, on Endless Possibilities by Andy May

For Endless Possibilities, Andy dug down into his songwriting catalog for some old tunes, like Noah and Curtains Made of Rain and added them to a bunch of newer pieces and songs, like Old Dog and So-‘n’-So,  written with his wife, Lauren LeCroy May. Joining Andy on these tracks are some truly great players—some of the finest on the planet— including legendary pedal steel guitarist, Hal Rugg, to whose memory the CD is dedicated. Lauren (lyrics): Written originally for Tavi (also the “old black dog” in Blackberry Jam), who is undoubtedly waiting for us somewhere on the river trail… with a stick! Since we wrote this song, we have sung it for a few others wonderful old furry friends, as well.