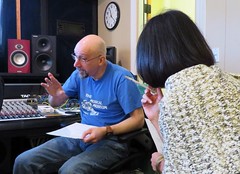 What an amazing week in the studio! Calling in the supporting vocalists – always a lot of fun! Unfortunately, we didn’t get photos of everybody, but here’s a good taste: Maura O’Connell, Brittany Allyn, Joanie Keller Johnson, Odessa Settles, and Bruce MacKay. Then, the legendary Curtis McPeake dropped by and added his banjo to a song. Thanks to all! Andy May – “Room for Roots”

Room for Roots – Andy May

Cover art by Andy May. About Andy   •  About the Title   •  About the Project   •   Credits   •   Photo Album  •   Video   •   Review Form If you would like a review or radio copy of the CD, please email us. About Andy Singer. Songwriter. Guitarist. Mandolinist. Producer. With his career now spanning 5 decades and 3 regions of the nation, Andy…

END_OF_DOCUMENT_TOKEN_TO_BE_REPLACED

Gallery image with caption: Haggard and the Queen